My apple tree hates me.

And who can blame it? Seeing as it's gone from being the vibrant example of verdant loveliness you see here 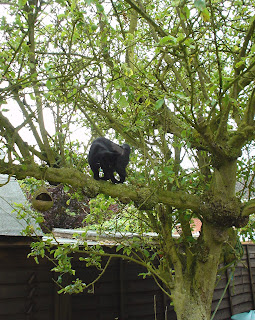 (being thoroughly enjoyed by Isis) to this... 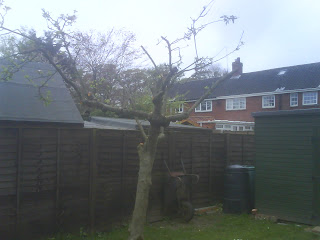 It had to be done. The fucking thing was well out of control and hadn't been pruned at all in the eight years I've been here. Probably hadn't been pruned for at least ten years prior to us moving in. I did find evidence of someone else's pruning but there wasn't much of it.

Didn't really have a clue what I was doing which is pretty shocking considering I spent something like 12 years being paid to be a gardener. In my defence the Tories swingeing cuts and compulsory competitive tendering had pretty much put paid to any kind of formal training. Pruning was mainly done in the winter by using a hedgecutter!

Fucking hard work though, especially considering that after hacking the poor thing to pieces I then had to cut all the main branches into 1 foot lengths (for firewood next year) and break all the twigs into sizes suitable for kindling wood. Trouble is I can't use the wood for at least a year, so I still have to pay some fucker for wood or coal this winter.
Don't think Isis is too pleased either. How's she going to launch stealth attacks on the local fauna now? 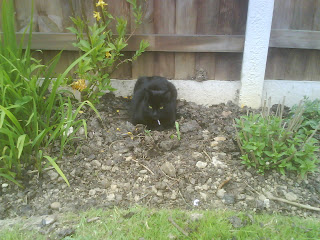 You don't do things by half! They'll be no apple pie this year then? :)

we get apples on random years..one year we get them, then nothing for a while..is that normal?

Dear Cacoa lady. I don't know much about trees at all really, but that doesn't sound quite right. Hack a few branches down and see what happens. :)

At the risk of sounding like a) a party-crasher and b) an irksome knowitall, there is a chance that the lovely Ms. Cacoa's apple tree might be behaving normally. In the US, specifically in New York State, where I live, we have a variety of apple called Baldwin, which is great for pies (although I'll confess that I like to eat the cookas, myself). For reasons I don't fully understand, most Baldwin trees produce fruit biennally, not annually, which means that if you miss apple pie season, you have to wait two years for another one, which is tedious -- unless you're luck enough to have trees that produce in alternating years.

I will agree, though, that a little judicious pruning might not go at all amiss. :)

(ducks sheepishly back into the lurker pool)

Good inside info Bakerina! I, on the other hand, have no insight on fruit bearing trees.

But at least I know about Petulia.

Bakerina: (hello Bakerina, nice to see you about) I can only go by my experience with my particular tree and that's fruited every year so far. With the possible exception of this year due to the Norfolk Bow saw Massacre! :D

Miss Elaine: Like a Dwarf with learning difficulties you are neither big nor clever! :p

I might make a banner for the Freak Conference and carry it above your head.

"He doesn't know what about Petulia".

Oh, how they'll laugh. And point.

I'll just point to the wife and kid thus ensuring all the geeks know I've had sex at least once. Then I'll point and laugh at all of them. Miss Elainonymous! :p

I'll stick a sign on your back which says "1 turkey baster for sale. Used once".

now you two play nice or i'll have to sit you in the naughty corner.

Dear Bakerina Lady, yes you have jogged my memory of some hazy biology lesson from a few decades ago..the thing with these apples is that i don't even think it's once every two years, they seem to pop up when they feel like it.

oh bugger, that's SQUEAL..SQUEEL..how the F do you spell it??

*points and laughs at C*

Dear Lovely C, that does sound like aberrant apple tree behavior. (*tries to block out imagery from first Evil Dead movie, what with its aberrantly-behaving trees*) You may indeed want to engage the services of a good tree-maintenance service. Or, if all else fails, just prune the dickens out of it. :)

right thats it! all of you sit down, fingers on lips (don't you dare rad) heads down. not one more word....

A year???
Talk about forward planning! I dont know where i'll be in a year let alone whether i'll need firewood.

I'm not planning a year ahead. I can't use it for a year. You have to allow cut wood at least a year to dry out before burning it on an open fire or in my case a wood burner. Otherwise you end up with tons of gunk up your chimley and you ladies know all about that! :D

"I can only go by my experience with my particular tree and that's fruited every year so far."

dear bakerina lady,
I am now scared of our two apple trees. They look very abberrant.