I bought this at the weekend. 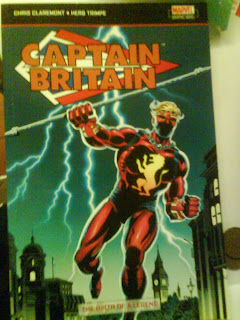 Regular readers to here and the Drum will be more than aware that I love comic books. As far back as I can remember I was reading comics. The Beano, Dandy, Whoopee, Whizzer and Chips, Monster Fun (now that was a great comic) Buster, the list is endless. They were the funny comics. Then there was 2000ad, Warlord, Victor, Tiger, they were the slightly older boys comics, and man they were cool. Even more cool, were the British black and white reprints of Marvel comics. Mighty World of Marvel, Conan, The Titans, all used to deliver the most amazing action on a weekly basis. I never knew these were reprints though. Nor that they were originally in colour. I can remember when I was a little kid my Aunt Sue, taking a break from travelling the world, dropped round my Dad's flat with some bloke she'd met. Said bloke said he had a present for me and gave me a bundle of american comic books. I was amazed. They were smaller than our comics, and they were in colour. I particularly remember Ka-Zar, and the original X-men being in this bundle of comics. I fucking loved them, read them and re-read them until they fell apart. That was probably the start of my obsession with what complete and utter wankers refer to as 'sequential art' (fucking sequential art, only a real dyed in the wool cunt would come up with a phrase like that). In 1976 Marvel UK who had been reprinting stuff from the 60's in black and white launched Captain Britain. It was fucking ace. I loved Captain Britain. I loved the fact I had my own Super-Hero to read about. He didn't go to diners for pancakes. He didn't talk about Woody Allen like the characters in Spider-Man did. He was British and he was a double hard bastard. His title didn't last all that long though. Probably because he was being written by Americans who really couldn't write convincing British people back then

It took Alan Moore to write a convincing Captain Britain, but by the time Moore was writing the character I'd grown out of comics (or so I thought) I'd discovered that girls weren't all that bad really. That cigarettes make you look cool, and that lager tasted like shit but if you stuck at it you'd forget all about the taste! It wasn't really until I was 17 and unemployed that I picked up an american comic book again and rediscovered my inner geek! The book in question was Uncanny X-men. I'd never read anything like it. The characters were more than two dimensional shouty people that beat other people up. There was an intelligence behind the writing. There were sub-plots continually being referenced and hints of a bigger picture that, if you stuck with the book, you might get a chance to see. I stuck with the book. They lied about the bigger picture! :D

One of the things that Chris Claremont ( X-Men writer) did that amazed me, was bringing Captain Britain into the book. He looked completely different to the Cap B that I remembered as a kid, but he was definitely Captain Britain. Claremont even moved Captain Britain into a team book called Excalibur where he was leader of what essentially were the British X-Men with a couple of yanks as members so they could sell it back to America. It was a great series at the start but once Claremont left it got very poor indeed and was eventually cancelled.

I had to wait for the internet to be invented before I could discover what it was that Alan Moore had done with the character. Thanks to people on the old Comics International forum I discovered there was a graphic novel featuring Moores work in a single collection. I managed to get hold of a copy via e-bay and was as happy as a pig in shit. The art was a bit scrappy here and there, but then it was being done on a part time basis by some bloke called Alan Davis who also had a full time job. The story though, was colossal, parallel earths, ancient gods, an unstoppable force of nature called The Fury, and all the time the story was being told there were all these little human touches. People speaking to each other like they were people. Not comic book characters simply moving the plot forward. It was good shit I tell thee, and Cap B was back to being my favourite comic character ever ever ever.

Which leads us to the Collection I bought at the weekend. As I explained via e-mail to some chums, when I found out the original strip was being collected my inner 8 year old self jumped with glee. Once I'd sat down to read it I decided my inner 8 year old self was a bit of a twat. Fuck but it was dire. Awful plots, stereotypical Cor Blimey Guv'nah brits, and some of the most stilted dialogue I've ever had to sit through. Who wrote it? Fucking Chris Claremont. The same Chris Claremont who reinvented the X-men making it Marvels' most popular monthly title. He wrote X-men for something like 18 years. 18 fucking years! I can only imagine that he'd written his Captain Britain stories with his eyes shut, while stoned on mescaline. Possibly with an ex-nazi war criminal dictating lines while holding a gun to his head.

I've read elsewhere that Claremont suffered from a very interfering editor who wanted action action action and left him no space for character development but all the same... I'd love to scan a few pages in so you could see how shit it is, but Marvel would probably sue me. They finished the collection on a cliff hanger which says 'to be continued in volume two'. You know I'm going to buy it too, don't you?

One pleasant surprise was finding this on the very last page 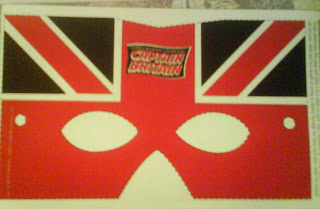 It's a facsimile of the original 'Fanastic Free Gift' given away with Captain Britain issue one. You had to put elastic bands through the holes in the side and then loop them over your ears. It hurt. But that didn't matter. I was 8 years old and I WAS Captain Britain! :D
Posted by Rad at 8:07 pm

and i bet you looked really cute in that mask too!

Except no one knew who the incredibly cute kid was. :D

Heh, yeah those stories are shite, but good on Panini for including the mask. You won't care, but they're putting out a Death's Head collection next month. Yays.

Didn't Kirby draw a Captains America and Britain team up? Is that in the collection?

You can never go home - oh, you already said that. The reverse is really good too - when you read something that you loved as a kid and find out that it's still brilliant, and works for adults too.(Charlotte's Web, in my case.)

There's a lot in education at the moment about getting boys to read - they lag behind girls - comics are CLEARLY the answer...

Danny: It's ffffffffifteen fffffffucking quid mate. Wait til it goes on sale.

Kelvin: (great avatar thingy) Nah, nearly all the art was by Herb Trimpe, but it's very very Kirbyesque.

Annie: Think I was a bit different as a lad cos I loved reading. I'd read the ingredients list on Worcester sauce bottles while I was having me tea. :)

Comics are a great way of encouraging kids to read but the real challenge is finding books that'll engage them too. Harry Potter is the obvious choice but as most boys get to 8 or 9 I'd imagine them finding Harry Potter a bit twee. You need stories about war, and aliens, and cars. Not necessarily in the same book mind! :D

Kelvin - The Deaths Head collection is out. I've got it. Amazon.