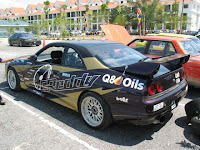 on the public highway. I on the other hand just hear 'would you look at that stupid cunt coming the other way, let's try and make eye contact with them so I can laugh in their stupid faces'.
I like customised cars, I loved custom scooters when I was part of that scene and even now whenever I see a smartly turned out bike I'll admire it. This sort of thing though, the graphics and logo thing, it has no creativity at all. No flair. It's just putting stickers on the body work. Oh the engine's probably tuned to perfection and it can do 0-stupid in point 5 of a nanosecond but where's the love? The creativity? It's just shit! There are people who live near me that have a car covered in Harley Davidson graphics. That's right A. Car. Covered. In. Harley Davidson. Graphics! I don't doubt that they own and ride Harleys, but to have it plastered all over your car? It's just shit and should be stopped. I always laugh at them too! Half the population of narj must think I'm a complete cunt. The other half know I am.
Posted by Rad at 7:54 pm

I though I was depressed after the mancs skuffed the winner in the 92 minute against us (the bastards!!), well that was until I saw the West Ham result. Tough mate. Thanks for making our result seem not so bad!

PS. Sorry for not commenting on the post! Thats a horrid car.

Andre, thanks for the commiseration but this is part and parcel of being West Ham. The bad times make the good times soooo much sweeter.

I have a thing for Subaru's. I know i shouldn't. But its a vice!

That flu/cold thing i've been dealing with came from you then did it? Charming.

You'd think that by the time you're old enough to drive you've got past the need to put stickers over everything you own.

Didn't he have enough airfix kits as a kid?

DD: Don't blame me, and I deplore your appalling taste in motors. :p

Danny: They're what keys were invented for. :D