Is that you Blog?

I must be an arsehole magnet

How else can you explain the cunt in the post office van. Who waited patiently by the letter box as I cycled past him. Then pulled away, overtook me. And immediately turned left across me. I was so shocked I could barely utter 'you stupid fucking wanker' at the top of my voice before giving him a few gesticulations in his rear view. Cunt!
Posted by Rad at 8:08 pm 1 comment:

Kid's school lunch issue is done and dusted. Huzzah! Now for the next load of old bollocks.

They're moving to a new site this year. It should have been finished in time for the September term but of course we're talking private companies building public buildings. And they never seem to get finished on time. So my kid will be moving to his new school in October. The week after the Autumn half term. And they're closing the school for a week. So I've got to find another weeks worth of childminders fees. That's £180.00 I've got to shell out 2 months before Christmas. I'm feeling a tad aggrieved about this. The school has said it needs the teaching assistants and other ancillary workers to assist with the move. They can't do it during the half-term week because they don't get paid during the school holidays. So essentially the cost will be borne by the parents and my Son loses out on a weeks worth of education.

Now, if I took my son out of school for a week during cheap holiday season there would be absolute hell to pay. But it seems it's fine to do it when it suits the school. I dunno about you, but I can't see how paying a few teaching assistants and ancillary workers a few hours overtime to accomplish the move with minimum disruption would actually break the bank. It's hardly being profligate. Is it?
Posted by Rad at 5:43 pm 2 comments:

Go and watch this..

To the wanker in the red polo

Yes you, you fat baldy cunt. You. Cutting me up at the traffic lights, didn't like it when I came past you again did you? Didn't like being called an arsehole, did you? Gave it the large one didn't you? Calling me a wanker safely from inside your tin can.

It's something I've been on the brink of a few times recently. But tonight I deactivated my facebook account.
Why?
Well, because some of my so-called 'friends' are actually a bit cunty. I know it's ironic me saying that. Seeing as I happily refer to myself as a cunt. And quite often turn up in peoples comments taking the piss. But there's a time and a place for it, and I'd like to think that I can recognise when that time exists and when it doesn't. I'd be mortified if I thought I'd really upset someone with a few off the cuff comments that were intended to be harmless. Which is why I've always looked at the context of what I'm commenting on. Seems like some people just don't have that level of self-awareness. Or maybe I'm just an oversensitive cunt, or an enormous great tart? But there it is, 'gone'.

They don't make it easy for you either. South Park illustrated that brilliantly in the episode 'You have 0 friends' When Stan tries to deactivate his account it kept asking him if he was sure, before digitising him and sucking him into facebook Tron-Stylee. And up to the last part that's exactly what it was like. You have to go through about five levels of verification before the account is deactivated. I don't dare click on a facebook link now. Because it'll immediately reactivate the account. This'll go on for months before the account finally dies a death.
Posted by Rad at 6:50 pm 4 comments:

firstly I'm very pissed off that my Doctor Who collection has outgrown its display area. 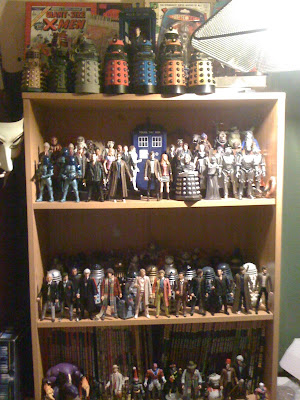 I can feel a massive cull of Star Wars related stuff coming on. But I really don't want to go there. The missus seems reluctant to move to a bigger house though.

Slightly happier news I got more minimates. Yay minimates. Bit pissed off with the trenchcoat Thing as he's supposed to be able to wear his sunglasses but can't. The doombots are great but irrelevant and Professor X looks fabby but is fiddly as hell.
Six-armed Spidey is fabby though :) 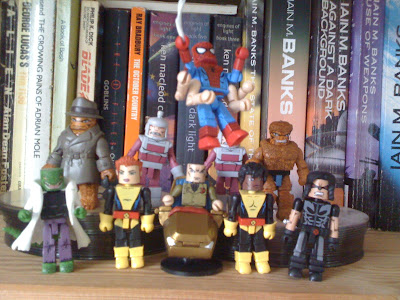